The Route of the Rally

Get in touch if you have any questions

What you need to know

You need to register to participate

From The Royal Courts of Justice we will be walking to:

This is what the route looks like on Google Maps: 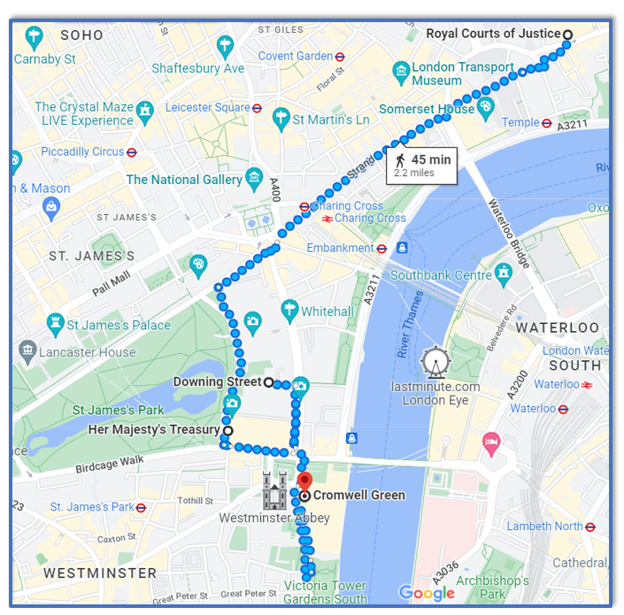 The total walking distance is about 2.2 miles, on mostly flat ground. Having discussed the route and the Rally with the police, we will be walking on pavements, not on the road and we will be making an effort to not cause any nuisance to the public.

Note that whilst the route map above suggests it will take 45 minutes, the rally will take longer than that because of the stops and speeches along the way:

Also, please note that at The Royal Courts of Justice, HM Treasury, at 1 Horse Guards Parade, Downing Street and Parliament (Cromwell Green) a petition calling for better financial regulation will be handed in; each petition nuanced according to the location, for example the list of reforms mentioned in the speech and in the petition at The Royal Courts of Justice will be about issues to do with the legal system; whereas the list of reforms mentioned at HM Treasury will be about the relationship between HM Treasury and the Financial Conduct Authority.

We expect the rally to end at roughly 4:30pm; after which we may go onto socialise and relax somewhere nearby, but of course that is optional.